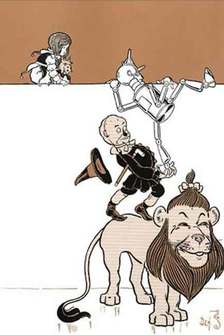 ​Many individual gay fans report falling in love with the MGM Wizard of Oz or the Oz books as young as 3 or 4, and the effects of this first encounter are deep and long-lasting. At least since the 1970s, the MGM Wizard of Oz has also been a highly visible part of gay male culture. Gay bars are named “Oz,” gay men dress up as Dorothy, Glinda and the Wicked Witch of the West for pride parades and Halloween, and gay writers often use Oz imagery and allusions in their work. The view that gay men love The Wizard of Oz is so prevalent that it has become part of the stereotype of gay men. Gay love of Oz is not just a phenomenon of the boomer generation; in the 21st century, GLBT youth organizations have picked Oz themes for their events, and pop singers from this younger generation such as Rufus Wainwright and the Scissor Sisters refer to Oz in their performances and songs.

Judy Garland’s performance as Dorothy cannot explain the gay appeal of the MGM movie; her other movies are not particularly beloved of gay Oz fans. Furthermore, Oz is more than the MGM movie; stories set in this magical land appear as other movies, in book form, and in other media. Many Oz fans prefer the Oz books or more modern retellings, such as The Wiz or Wicked, for their favorite version. But more importantly, reasons related to a particular version of an Oz story don’t adequately address the deeper questions of the gay Oz fan’s response to Oz, or what the gay Oz fan gets from the story. My research has shown that the core story of The Wizard of Oz is what matters most.
​
Gay fans escape to a safe place and a utopia that celebrates difference. The boyish girls and girlish boys in Oz stories are role models. The message of The Wizard of Oz is to become your own true self; and the MGM movie can be seen as an allegory of coming out. Gay boys and men use Oz for escape, imaginative play, and therapy, and find spiritual and mythic sustenance from Oz. Looking at why these issues matter to gay men and gay boys can tell us something about what it means to be gay. And examining how the MGM movie is enshrined in gay culture and gay folklore can reveal important truths about the needs of adult gay men, including the need for a shared culture and history.